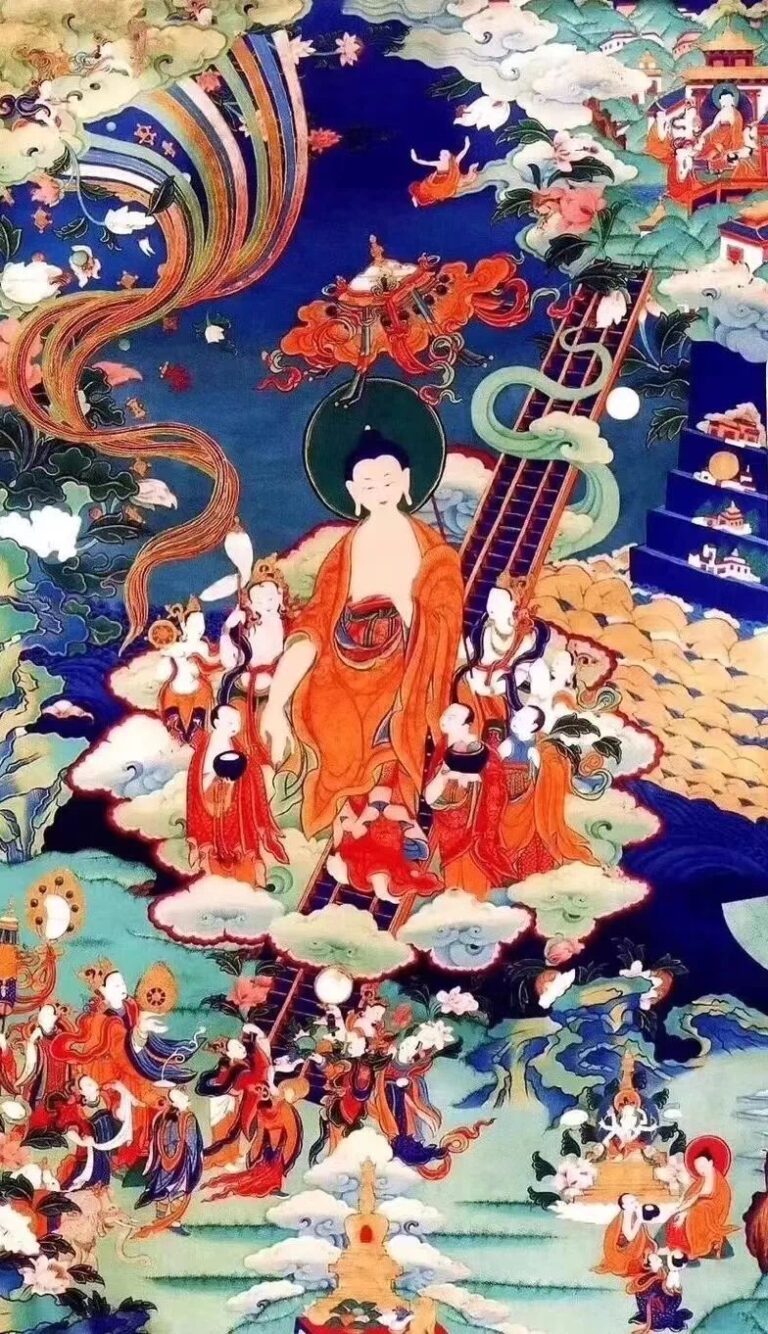 November 15th, we will celebrate Lhabab Duchen and anniversary day of His Holiness Kyabje Zong Rinpoche’s passing to nirvana, with One Hundred Thousand Offerings Puja. This day,  22nd day of the ninth lunar month — marks Lhabab Duchen in Tibetan Buddhist tradition, the day we celebrate Buddha’s “descent to earth from Heaven.”

Lhabab Düchen is one of the four Buddhist holy days, commemorating four events in the life of the Buddha, according to Tibetan traditions. Lhabab Duchen is the celebration of the Buddha’s descent from the Tushita heaven, returning to earth. According to legend, at the age of 41, the Buddha ascended to Tushita heaven, Land of the Thirty-three Heavens, at the request of Indra (the king of that heaven) to give teachings to benefit the gods in that desire realm, and to repay the kindness of his mother, Maya Deva, who took rebirth in this heaven, thereby liberating her from Samsara. He gave teachings to the divine congregation, including his mother, for three months.
When his disciple and representative Maudgalyayana, and the inhabitants of the earth, fervently begged him to return, he responded to the call of the suffering humanity and descended on a ladder that had thirty-three rungs, handcrafted by the divine architect Vishwakarma. This event is considered to be one of the eight great deeds of the Buddha. Therefore, this is a very special and auspicious day.
On Lhabab Duchen, the effects of positive or negative actions are multiplied ten million times. It is said that if we engage in any kind of virtuous action on this day it becomes especially powerful and our merit greatly increases. For example, if we offer one single light offering this action is multiplied to become millions of light offerings.
“On this day we should especially remember Buddha’s kindness. In reality, every teaching we study and practice comes fundamentally from Buddha Shakyamuni; all our wisdom that understands Dharma comes from his kindness. Realizing this we should dedicate all the virtues we accumulate today to fulfilling his wish. What is Buddha’s wish? His main wish is that his teachings flourish throughout the world so that all living beings find release from the suffering ocean of samsara and attain permanent inner peace, permanent freedom, and eventually great enlightenment.” (Excerpt from a commentary given by Geshe Kelsang Gyatso in 1991)
Segyu Monastery will conduct this thousand offering puja and we wish to invite anyone who has the wish to offer butter lamp, flowers or dedications on this day, or if you wish to sponsor any part of this puja. Please follow us on instagram and facebook for updates on this event.

Monks alms 111 monks you may offer as wishes any amount for per monk,